Awareness Networks released study, "Trends in Adopting Web 2.0 for the Enterprise in 2007," based on 112 participants and here are the highlights:

Richie Fitz commented in my earlier post Cisco got Facebooked asking about the set-up process and tips - here's what I can offer: 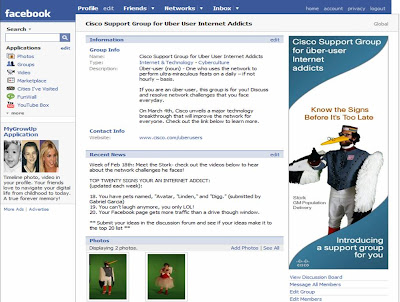 Join the group to see for yourself!

I'm excited to announce that I was part of a team that launched a new Facebook group for Cisco Systems: Cisco Support Group for Internet Addicts. It's a fun group playing off the recent Über User campaign to promote - well - that's sort of a secret until March 4th so for now it's to promote the big event that announce how "life on the network will be better for everyone."

I know there are other marketers who occasionally read this blog - I'd be interested in any feedback (or suggestions) good or bad on the campaign and the set-up of the Facebook group. Also I hope that you'll join the group and participate in some of the discussions.

Lastly, in the light of the Valentine's Day (even though I'm a day late), I'd like to introduce Cupid, the Infatuation Specialist - enjoy!

Posted by LaSandra Brill at 8:06 AM 3 comments:

Ryan Kuder twittered his last day at Yahoo! as they gave him the boot. You get a play-by-play update of this day from getting the news to backing up his files to getting his phone confiscated.

What's interesting about this is how real-time every aspect of our lives can be. Every meeting, every event, every conversation could be documented in seconds with the quick movement of one's thumbs across the keyboard on their phones. A private conversation with a customer or a meeting with an analyst can be 'Twittered' at anytime and posted for the world to see. This illustrates yet another way Web 2.0 is changing the way we communicate.

For marketing professionals the only thing scarier than someone twittering something negative about one of our campaigns is no one twittering anything at all.
Posted by LaSandra Brill at 8:43 PM 1 comment:

Think Yahoo is worth more than 44B? Well, they think so which is why they will be officially rejecting Microsoft's offer tomorrow. I think this is a blessing in disguise for Microsoft because I don't see how two struggling companies equal a stronger one and Yahoo comes with a lot of baggage. As for Yahoo I think this may be the best offer they get as their downward spiral is not going to increase their market share with time.
Posted by LaSandra Brill at 11:53 PM No comments:

The Dog & Pony Show is Over

Cluetrain Rule #16: Already, companies that speak in the language of the pitch, the dog-and-pony show, are no longer speaking to anyone.

Unfortunately, at least in my experience this is a rule that many marketers often break. It goes against everything we've learned in school - we've been trained to spin, position and drop plenty of buzzwords. Now it's time to unlearn these skills. I know it's easier said than done but if you're looking for ways to hint to your marketers that this no longer works and you think little humor will work try sending them this IBM video:

Posted by LaSandra Brill at 8:45 PM No comments:

Pulse on the Blogosphere

StumbleUpon Takes the Social Bookmarking Lead
I can't say I'm surprised but StumbleUpon wins the ProBlogger popularity contest with 40% of the vote, del.icio.us had 21% and Digg had 19%. Are you still trying to figure out how to get 'stumbled'? Read The Guide.

Blogger Tips - How to Get Noticed
Whether your a new blogger or an old timer this quick post with three main tips is worth a read. If you looking for more ideas to gain popularity check out this top 50 list. Once you start putting these tips to work you'll want to measure your success right? Well check out this post for a good framework for for success.

Adobe Wants You to Share
Sharing, collaborating and doing it online is the trend of the decade and Adobe surely can't be left out in the cold. Their new web service - Adobe Share - allows you to share docs online. Check out this post for a product review and product comparison.

MySpace Follows in Facebook's Footprints
On Tuesday MySpace launched it's own developer site allowing anyone to build apps onto their platform. Is it too little too late? I don't think so but we'll just have to wait and see...

Reputation Marketing
What a great post by Paul Dunay - this one liner sums it up "A reputation that took decades to build can be threatened by a single event." Read his post for a three-step approach to that could save your reputation.

Can You Handle the Truth?
Matt Dickman doesn't think so and I have to agree - the biggest challenge corporations have with Social Media is letting go because they are afraid this "truth" will surface. What they fail to realize is that they are already surfaced. Ok, let me stop before I get on a rant - check out Matt's post for suggestions on how to get your social media feet wet.

Posted by LaSandra Brill at 10:18 PM No comments:

In my last post I only gave a summary for 2 of the 5 sessions I attended. Here I will provide key takeaways from the following sessions: Social Advertising and Social Media, Widgetizing the Web and Designing the Mobile Web.

Cam was a big promoter of advertising on social media sites where 20% of the internet visits reside. He specifically used Facebook as an example where he touted the ability to target your ads based on demographics and geography as well as keywords based on profile content. You can run target counts from the Facebook site without having to pay any ad costs here.

Rajiv promoted TubeMogul where from one site you can have your videos posted to multiple sites including YouTube, MySpace, Google, Yahoo!, MetaCafe, and Revver. Rajiv also provided some obvious and useful tips when it comes to advertising:

Kent talked about Friendsters popularity with 10B page views/month with an average engagement of 220 minutes/month however he took the opposing view of Cam and questioned the ability to effectively advertise to this audience for the following reasons:

Named moderator was Neil Patel, Internet Marketing Consultant and PronetAdvertising however he didn't play that role and instead just took up a seat on stage. Panel speakers included Hooman Radfar, CEO of Clearspring, Pradeep Javangula, CTO of Tumri and Gary Baker, CEO of ClipBlast!.

Unfortunately this session was a waste of time. It had no structure and even the panelists bored and uninterested - at one point is looked like the moderator was dozing off. I ended up taking this time to catch up on a few emails...

I thought Julie did a great job moderating this session although I heard others say she was a bit combative towards the panelists. I found it entertaining and she kept the session on topic and didn't let the panelists dance around a question.

Brad shares the growth of mobile access by telling us know that more first time internet connections came from a phone as opposed to a PC and argued that since this is their first experience with the internet it's worth the investment to ensure it's a good one. He also mentioned that Barnes & Nobel and Amazon have been mobile since 1999 (I thought that was interesting). Although on the flip side he pointed out that less than 5% of phones in the US offer a browser experience.

Barbara says it only makes sense for the "head" (not the long tail) and it just depends on who and where your users are. She also made the point that if your targeting India the answer is a definite 'yes.'

Ain talked about Nokia's mobile offering and says that there are now phones that retail for under $100 that offer internet browsing. This will surely effect that 5% number that Brad mentions within the next few years. He also talked about the enhanced web experience that can come from a mobile phone based on location services and the fact that users are voice and camera enabled.

> How many mobile users are looking for specific information vs.. surfing the web?

Barbara agreed which is why it's important to optimize the site upfront for mobile users but at the same time, she warns not to lock users out of the full site and to offer links for more information.

> How much should people allocate to building a mobile web?

This ended up being a repeat to the first question and the answer boils down to 'it depends' - if your users are mobile that you should definitely have a mobile site but if they are not then it probably doesn't make sense. There is also some degree of strategy and how having a mobile site will effect your brand.

> What does a 'smaller' mobile site need?

Here are a few tips from the panelists: Less is better and make sure to put your key messages at the top. Design for 'blind users.' Barbara recommended Little Springs Design. There was a small debate on the use of apps but my conclusion is that most phones aren't ready for them yet so don't waste your time/money but it's a space worth following especially if your users are mobile.

The most important point - don't just shrink your site, you need to build from scratch.

> What does Mozilla's mobile browser and roadmap look like?

That pretty much sums up this event. Although I am a big fan of WebGuild I have to admit I wasn't impressed by the overall schedule and organization. Next time I hope they'll take things a little deeper rather than trying to pack the day with 45-minute sessions that just scratched the surface. 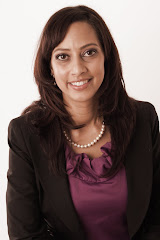